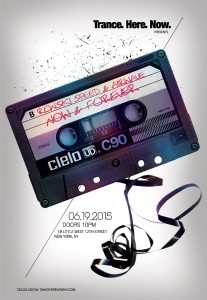 Friday June 19th will forever be earmarked in the NYC trance communities memory bank. As most know, the genres best vibes and applause come from anything marked “classics”. With that said, New York City doesn’t really see many of these evenings. However, when we do, they tend to be phenomenal. When Trance.Here.Now brought in heavy hitters Airwave, Ronski Speed and NYC’s own Mike Saint-Jules to Cielo on June 19th, it was evident from the start where their intentions lay. Clearly on reminding our trance lovers what is most important, our roots, and the music that brought us to where we are today.

The truth is, a promoter could probably announce a “classics” night to the trance community anywhere in the world, and even without a line up, still bring on a proper promotion and level of excitement from the crowd. This particular event had more than that, it had not one, not two but three hugely respected artists in the trance scene headlining. Mike Saint-Jules is known for his love of spinning vinyl and one can clearly see on his face the enjoyment he gets from dropping tunes that people have long forgotten. Opening the night, he did just that and had even Airwave himself smiling with recognized enthusiasm for tunes he said he himself and forgotten he produced. One of the great parts of have MSJ open a set is that he has a great following, in and out of NYC. Which meant that the atmosphere and the energy were already at prime before 11pm hit. Some of the classics Mr Saint-Jules threw at us:

As if out of nowhere, the music went low and it almost seemed as though something had gone wrong. Quickly as the sound lowered, the bass continued on and a bright smile peered next to MSJ as Airwave snuck into his set. The intro piece was something of an anomaly, yet perfectly placed. It slowly grew into something that was quickly recognized and had everyone happier than Saint Nick on January 2nd. Sunspot crept in and  the world stopped for everyone on the dance floor. A moment of recognition, then a moment of excitement followed by absolute euphoria. The song teared off rather quickly, but left most of us in awe. It kept in my brain so strong that I had to take a moment to ask the artist himself what had happened there. What had we been given? Airwave explained something to me that I never knew, but find fascinating. He doesnt just produce trance and progressive tunes for us on the dance floor, but he also has quite a few more feathers in his hat. He produces soundtracks, from movies to everyday viewing. This, was an actual orchestral piece he had produced. Mesmerizing and delicious in all its glory, and we’d been given it in a nightclub in New York City. Hows that for versatile?

Lolo went on to play one of the best sets to grace any set of speakers here in NYC, as evident by the faces and bodies at the event. After throwing in some tracks that date back as far as 1999, Airwave slowly handed over the reigns to his other partner in crime, Ronski Speed.

The well-known master of vocals had recently been invited to NYC for a classics event that was unfortunately cancelled, so much of the crowd was very excited to see what the man would bring to the table. NYC is no stranger to Mr Speed’s classics sets and we all were anxious to see if we’d get something new.

Ronski was not only comfortable behind that booth, but he reminded us why we should never forget our classic roots. Of course, he dropped The Space We Are (is any set by Ronski complete with out that?). Café del Mar, of course, came through the speakers along with more than one Nu NRG track. When Burned With Desire came on it was evident that everyone on the dance floor fully approved. One of my personal favorites- Soulseeker, which is Ronski with his Euphonic team mates, Stoneface and Terminal clearly made a lot of peoples nights.

The event as a whole was an extreme success. By watching the crowd and the entertainers, you’d think that NYC never gets classics nights. While we don’t get that many, we certainly do, and this evening might have a been a great reminder that it wouldn’t hurt to have more throughout the year. As always, everyone at the venue and everyone promoting this event were not only helpful but part of the fun and the night seemed to really go off without a glitch.