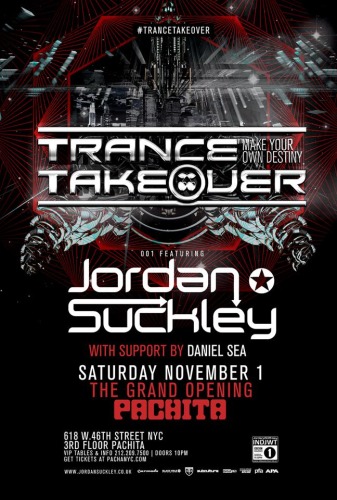 With the popularity of trance music on the rise in America, more and more parties are popping up and filling fan’s calendars to the brim. New York City’s legendary mega-club Pacha is no different, who has noticed the trend and brought a new party series to the table with unprecedented trance talent. Trance Takeover 001, the first of this series, took place in their top floor venue Pachita, bringing together the NYC  sick fuck army together under their leader, Jordan Suckley for a mental night of music. With local support from Renaissance, Dave Barbera, Daniel Sea, and Planco, the night was set up to showcase all genres of trance. Fans were also lucky enough to be partying on the night of daylight savings, bringing an extra hour of dancing when 2am rolled around, and giving Mr. Suckley an extra hour in his set. With the Saturday event still acting as an extension of Halloween weekend, there were appearances by Daft Punk, Jake from State Farm, and other costumed characters ready to rage.

To start off the evening, John Planco warmed up  the decks as fans filled into the spookily decorated space filled with spiderwebs and dim lighting. Despite some not-so-ideal cold and rainy weather, fans arrived early to warm up and prepare for a long night ahead. In the past few months, Planco has really come into his own as a DJ, able to mold and adapt to each lineup of DJs he plays with to craft a perfect set for whichever timeslot he plays throughout the night. Up next, Renaissance took to the stage, bringing more of the electro realm of trance to the party and getting the crowd pumped up for the rest of the evening.

Pachita became comfortably full around midnight, when the majority of fans had arrive Daniel Sea was taking to the stage. Daniel Sea is quickly becoming one of NYC’s hottest openers, with his new release “Voices” gaining traction in the scene and his name seemingly on every trance party lineup for the past month (which is great, because he never fails to deliver a new and exciting set). The melodies of his own productions and remixes are ethereal with smooth basslines below, paired with some of his favorite tracks of the moment to craft a great opening set. By the end of his hour long performance, fans were ready and willing to be slayed by Jordan Suckley.

When Suckley finally took to the decks, it was almost as if the zombie apocalypse had finally reached NYC and everyone had been infected through his psytrance beats. I’ve been to countless trance shows, and I haven’t seen people dance, thrash, and yell harder at a set in my entire life. It was apparent that NYC would be taking “sick fuck” to a whole new level this evening. He immediately went into hard hitting psytrance, sampling from Astrix, Will Atkinson, Angry Man, and more to put the crowd into an absolute frenzy. Tracks like Adam Ellis’ remix of Suckley’s “Contaminated” pushed the whole crowd to a new level, with fans screaming out for more and dancing ferociously into the night. His set was illuminating, igniting a trance fire throughout New York City that will burn until his (hopefully soon) return.

Feeding off of the energy of the room, Dave Barbera closed out the night with some high energy, uplifting trance to keep everyone dancing hard as the night came to a close. The night was a trance rollercoaster, moving from smooth and progressive to hard, dark, and dirty beats. Trance Takeover 001 was definitely a success, and I can’t wait for round 2!