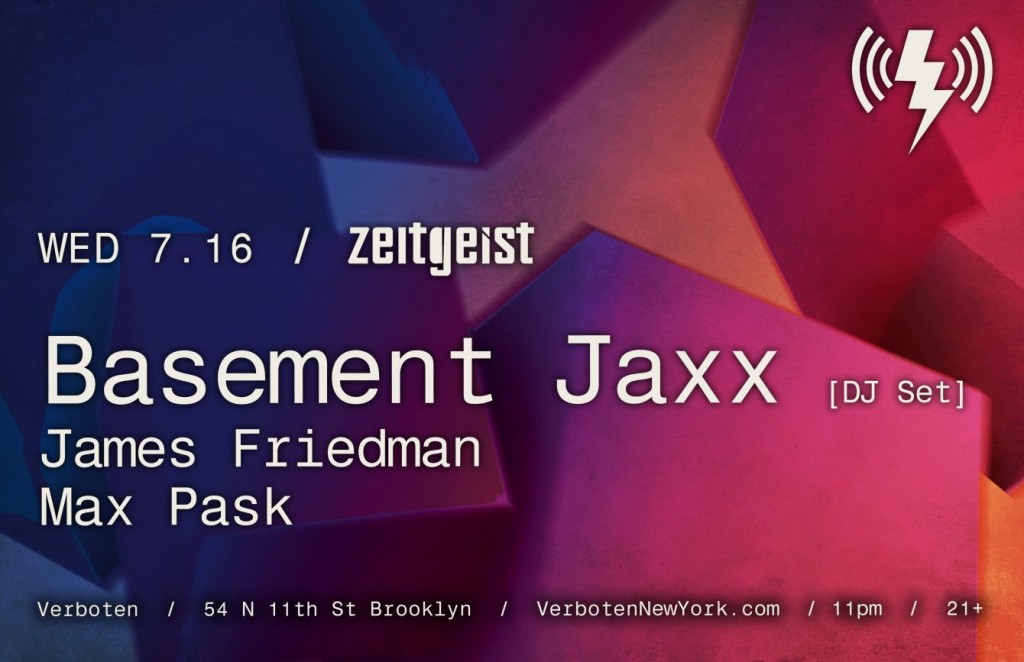 It seems like generations have passed since we last heard from British DJ duo Basement Jaxx. With their biting female vocals and groovy basslines from their 90s classics, hits like “Where’s Your Head At?” and “Red Alert” still linger in memory as if they were yesterday. Finally, though, Basement Jaxx has returned to the forefront of dance music, ready to smash down genre boundaries and unite us all under one disco ball. With the release of their new album, Junto ,fresh on the horizon, they pull influence from Latin rhythms, while staying distinctly “Jaxx” with their sound.

Verboten brought this powerhouse duo to Brooklyn for their Wednesday night Zeitgeist series, and one thing is for certain: fans were ready to pack out the control room for Basement Jaxx’s groovy beats. Warming the crowd up for the evening was James Friedman, who took command of the room with smooth, progressive tracks. The control room was surprisingly full for a weeknight, and the crowd filled in early as not to miss a second of the night. Friedman’s choices such as Leon Vynehall’s “Time” and Tiga and Audion’s “Fever” matched the mood of the room, slowly loosening the crowd’s inhibitions for the night ahead.

Around 12:30, the room echoed with a resounding call out to the “lords, ladies and low-lifes” in the room, ushering us into the world of Basement Jaxx. The duo started out strong with tracks from Junto staring with the enlightening lyrics of “Power to the People” paired with tropical melodies and tribal drums. They followed up with the undeniable vocals of their new track “Unicorn”, while the latin-influenced “Mermaid of Salinas” sent the entire room into a gleeful frenzy. Their lead single, “Never Say Never”, pairs a pop-chorus and a deep house groove, that’s perfect for a summer hit. Other memorable tracks of their set include dropping into Shiba San’s “Okay”, Aunjel Adams’ “Woman”, and Oliver Heldens x Becky Hill’s “Gecko (Overdrive)”. Nostalgic Jaxx fans were pleased to hear “Be Free” late into the evening, keeping the energy in the control room high until the very end. When their set came to a close, the entire room was begging for more. Thankfully, Max Pask kept fans dancing ‘til the wee hours of the night with thumping bass lines.

After seeing Basement Jaxx on Wednesday night, it became more than apparent that the duo is back, and back with a vengeance. Their set was so playful, so infectious, that I immediately wanted to add their new album to my music artillery. While their sound is completely different from their earlier tracks, they still maintain the same jovial, lively spirit in their tracks that make them absolutely undeniable. I would not be surprised to see them rising on the charts once again, sealing their glorious return to the dance floor.

‘Junto’ is available for purchase on Itunes and Beatport now—be sure to grab a copy for your own!

Swedish Musician Avicii Has Died at 28